While on holiday in Marsa Alam you have the perfect opportunity to visit beautiful Aswan with an English-speaking guide and see three magnificent temples: Isis on the island of Agilkia and two amazing buildings in Abu Simbel.

Aswan is a picturesque city in the south of Egypt, beautifully located on the east bank of the Nile, at the first cataract. One of the driest inhabited places in the world and at the same time the winter capital of Egypt. Aswan has an African atmosphere and it is inhabited by Nubians. The city is a starting point for tourists going to the temple of Isis on the island of Agilkia, the Kalabsha temple, Abu Simbel and those who want to see the Great Aswan Dam. You can also have a trip up the river with felucca - a traditional sailing boat that allows you to further understand the atmosphere and landscapes of the Nile.

Nearby to Aswan there is an ancient syenite quarry (red granite) in which sculptures and the unfinished, largest obelisk were found. There are two large islands on the Nile near Aswan: Elephantine and Kitchener Island. At Elephantine, there is the Oberoi hotel and the Nubian villages, and Kitchener Island is mainly a botanical garden. Below the High Tama, or closer to the city of Aswan, there is an Aswan Dam built at the beginning of the 20th century, older and lower than the High.

About 280 km south of Aswan, on the western shore of Lake Nasser, is one of the largest monuments in Egypt, as famous as the pyramids of Giza - Abu Simbel. Ramses II not only ruled the country for 67 years, but also left his monuments everywhere, including Abu Simbel. This place was discovered in 1813 by the Swiss explorer Ludwig Burckardt, who, whilst wandering through the wilderness of the Orient, saw the heads of colossus protruding from the desert sands.

The great temple of the god of the sun Re-Horakhty in Abu Simbel is the apogee of the monumentalism of the New Kingdom at the height of its power. At that time, Ramses II led colonial wars. In order to impress the Nubians and emphasise his power, he ordered a temple to be built in the mountainside. Before entering the building, you can see four huge 24-metre statues of Ramses II himself. The figures greeted travellers traveling to Egypt from Africa. The phenomenon of this temple is that it has been so brilliantly designed that twice a year - on Ramses' birthday and on the anniversary of his accession to the throne, early in the morning, the rays of sun fall into the main sanctuary in the building and illuminate three statues: god Re, Amon and pharaoh Ramses. The fourth figure - the god Ptah, stays in the dark all year long.

Next to the temple of Ramses II, there is a smaller building dedicated to his beloved wife Nefetari and goddess Hathor. The facade of this temple is decorated with six 10-metre statues of Pharaoh and Nefertari.

On the Nile in 1960-70, the High Dam was built. The accumulation of waters would lead to the irreversible destruction of the monuments in Abu Simbel and the Temple of Isis on the island of File. Thanks to the help of UNESCO, the monuments were moved to higher places. The international commission dealing with the rescue of Abu Simbel was headed by a Polish archaeologist, Professor Kazimierz Michałowski.

THE TEMPLE OF ISIS, THE UNFINISHED OBELISK

Departure from Marsa Alam in the early morning hours (05:00 am) we will transfer to Aswan by car. We will then cruise to the picturesque Agilkia island, where there is a temple complex dedicated to the goddess Isis (transferred there from previously flooded Philae Island).

We will then visit the largest, unfinished obelisk.

Accommodation in a 4* hotel or on 4* or 5* Cruise Ship. Dinner at a local restaurant or onboard the Cruise Ship

On the second day, an early wake-up call (breakfast on the way - packed lunch), a road trip through the desert to Abu Simbel awaits us, where we will visit the temples of Ramses II and his wife Nefertari (the place of worship of god Ra Hour Akhti). These temples were moved before the building of the High Dam in the 1960s, resulting in a flood of a long section of the Nile area below Aswan. We will also visit the Great Dam on the Nile near Aswan. The dam offers a magnificent view of Lake Nasser and the first cataract on the Nile.

Lunch (drinks are extra charge) and return to Marsa Alam in the evening. 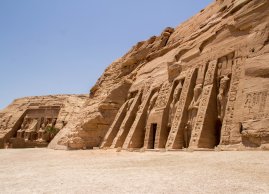 An optional trip to the Nubian village, where you can see small crocodiles, a Nubian school and drink traditional tea in a Nubian house - 30$ per person.